The R-400 is a modulating float pilot with a plastic float, suitable for remote installation on a tank or reservoir. It positions the main valve in proportion to the reservoir level. Standard configuration is for the pilot to close on rising level. Specify “Reverse Acting” for the pilot to open on rising level. The polypropylene float connects to the pilot on a 10 in / 250 mm brass rod.

The R-400 pilot is used as the standard float pilot on all 106 and 206 series modulating float valves. 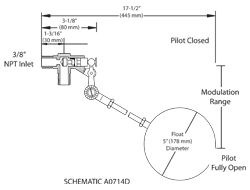 For more information on the R-400:

Mueller refers to one or more of Mueller Water Products, Inc., a Delaware corporation ("MWP"), and its subsidiaries. MWP and each of subsidiaries are legally separate and independent entities when providing products and services. MWP does not provide products or services to third parties. MWP and each of its subsidiaries are liable only for their own acts and omissions and not those of each other. Mueller brands include Mueller®, Echologics®, Hydro Gate®, Hydro-Guard®, HYMAX®, i2O®, Jones®, Krausz®, Mi.Net®, Milliken®, Pratt®, Pratt Industrial®, Sentryx™, Singer®, and U.S. Pipe Valve & Hydrant. Please see muellerwp.com/brands to learn more.