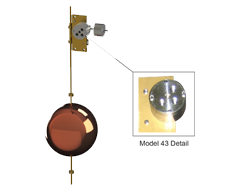 The pilot shall be a Singer Model 43.

For more information on the Model 43:

Mueller refers to one or more of Mueller Water Products, Inc., a Delaware corporation ("MWP"), and its subsidiaries. MWP and each of subsidiaries are legally separate and independent entities when providing products and services. MWP does not provide products or services to third parties. MWP and each of its subsidiaries are liable only for their own acts and omissions and not those of each other. Mueller brands include Mueller®, Echologics®, Hydro Gate®, Hydro-Guard®, HYMAX®, i2O®, Jones®, Krausz®, Mi.Net®, Milliken®, Pratt®, Pratt Industrial®, Singer®, and U.S. Pipe Valve & Hydrant. Please see muellerwp.com/brands to learn more.