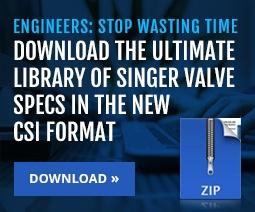 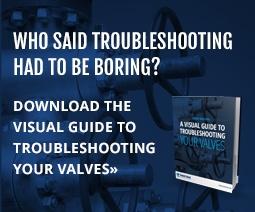 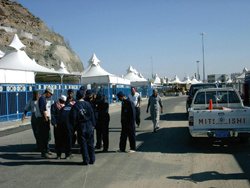 To accommodate pilgrims who overnight in the Mina Valley during the annual Islamic pilgrimage, the government of Saudi Arabia provides shelter in residential towers and tents. One of the housing projects was plagued with multiple broken pipes and a dysfunctional pressure reducing valve, resulting in floods. Upon inspection by Singer Valve’s Ramzi Soujah, it was discovered that the pressure reducing valves required up to six turns before a pressure change was noted downstream. Also, the pilots’ sensing ports were extremely small and susceptible to being plugged by dirt and mineral build-up.

Ramzi Soujah replaced the faulty pilot with a Singer Model 160 Pressure Reducing Pilot. The pilot has a non-clogging pilot guide stem above the diaphragm, which is totally removed from the flow of water in the main pilot chamber. Because the outlet is located in the bottom of the pilot, 90 degrees to the inlet, the pilot is self-cleaning and self-flushing, thereby eliminating debris build-up. The pilot was the ideal solution for the Mina housing project.

As soon as the pressure reducing valve was installed, the valve began to regulate the pressure. After observing such positive results, the housing contractor purchased Soujah’s entire stock of Singer Model 160 Pressure Reducing Pilots.

“I WAS EXTREMELY PLEASED WITH THE QUALITY AND DESIGN OF THE SINGER PILOT. THE PILOT HAS OPERATED BEAUTIFULLY EVER SINCE.”